The Vinbarg housing estate is considered to be the most neglected in Bardejov. It was built at the end of the socialist era in the 1980s, and since its construction until recent years there has been no innovation, public spaces have remained the site of arid land, where many cars are copied. Many residents of the settlement experienced their childhood here and today they raise their children here. The city wants to improve the external public spaces of the housing estate through subsidy funds. This project builds on the previous implementation of the revitalization of part of the block of flats housing. In the project, we applied the experience from this already implemented part of the housing estate and to better understand the needs of the inhabitants, we prepared a questionnaire survey, which confirmed our ideas.

Half of respondents have children under the age of 18, and prefer public sports multifunctional and exercise elements (32%),
They lack more options for gastronomic services and evening entertainment (16%).
When commenting, the most common activities are in the public space, especially joint barbecues, joint cultural and sports events.
When asked about pre-gardens, 70% of respondents answered that they would accept such a semi-public space, of which they are willing to take care of this space.
Social and cultural activities and sports grounds (43% in total) are considered to be a significant shortcoming.
When parking cars, 27% of respondents perceive the lack of places, approximately 30% perceive their arrangement and organization as a bigger problem. Another place is the lack of winter maintenance and the problem of accessibility.

Before the actual elaboration of the project, we performed an analysis of the territory and its wider relations, prepared a verification study, where many factors were evaluated. The study focused on a wider area, while it was necessary to define the feasible part so that it did not exceed the budget possibilities and the implementation also met the requirements of the challenge, the city and the inhabitants. 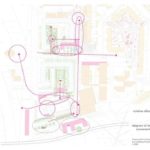 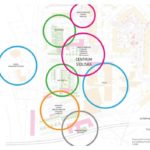 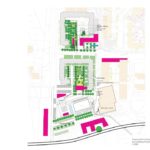 In the study, we prepared an opinion on the central part of the territory, a consideration of the development in the localities in question, how to direct the construction in this area, so that it gradually acquires a higher spatial quality. However, the central space requires dealing with the parking area and also changes in the zoning plan. At the moment, it does not allow the creation of a full-fledged intra-block regeneration due to the number of traffic areas and the need to involve street space in the solution concept. We recommend preparing a zoning plan for the entire housing estate and its development part, which specifies its functions, use and sets out more precise its future development in more detail.

The study determined and verified the basic parameters and necessary functions that will be applied in the solved area. The basic division of functions consists in the creation of space and the addition of functions for public sports activities, which can also be used by the school for the needs of teaching students. The housing estate lacks free space for meetings and cultural events, which would at least disturb the inhabitants of apartment buildings. The existing courtyard is neglected and in connection with the installation of a new rainwater drainage system, its entire space, new sidewalks and access to the area from the western block, which is cut off from its courtyard and the entrances to the building are not currently used, will be revitalized.

The design respects the morphology of the terrain as much as possible, to which the distribution of functions is adapted. The walking promenade (professionally called “boulevard”) is on a flat platform with views of the city center.

In front of the swimming pool, there is currently insufficient space to enter this important building. With the modification and construction of a new retaining wall, the forefield of the swimming pool will be extended, and there will be further planting of trees, which will form a natural shade. It will also allow the entry of equipment and emergency vehicles in case of emergency.

The gazebo is located at the highest point, allows hiding from the rain, sitting under the roof.

In the lower part next to the multifunctional playground there will be a flat paved area – a square for various cultural and social events, it will be possible to organize concerts, debates, presentations, theater or other activities that can be spontaneously carried out by residents or visitors.

The view of this area is enhanced by a key element – a terraced natural amphitheater with planting perennials, trusses and trees. The individual terraces have different functions, all of which offer seating from different levels and with different surfaces.

At the end of the area, the space is defined for the location of a sales stand, which will allow basic refreshments. There may be a seasonal mobile buffet, but in the future an object will be installed for this function, supplemented by a public toilet service. In the first phase of the project, we focused mainly on the ecostabilization functions of the area. We have developed a concept for capturing and using rainwater from the roof planes of the inner block, those that we can easily separate from the existing unified sewerage and to the extent that the budget allows. The investment in water retention elements was set at EUR 200,000.

Existing apartment buildings drain rainwater trapped on the roofs of buildings into a single sewer or adjacent surface, which is not desirable, especially in situations of extreme precipitation. The aim is to reduce the impact of climate change, in particular rising temperatures and torrential rains, by ensuring that rainfall from the roof planes is captured and slowed down by surface infiltration. By increasing temperatures in the urbanized landscape, there is a risk of overdrying of greenery from overheating of the roof and its subsequent degradation, even loss. Likewise, the capture of precipitation and its use during periods of drought will contribute to the maintenance of vegetation and the preservation of the microclimate, mitigating the effects of extreme weather conditions. The project primarily addresses the management of rainwater in the locality of the part of the housing estate as part of the future comprehensive solution for the revitalization of the inner block area. The retention rigol is an underground longitudinal tank filled with gravel, which also captures approximately 60 m3 of precipitation, water seeps in, excessive precipitation flows into the lower retention field, which captures additional water from other areas of the walls that do not capture retention tanks.

The fountain is an aesthetic element in the center of the square, it is constructed as a simple walking area in which the nozzles are placed in a square grid. It is supplied with rainwater trapped in the retention tank from the roofs of the courtyard. Next to the fountain there is also a drinking fountain (picia fountain), which is connected to the public water supply. We paid great attention to planting and revitalization of vegetation. The purpose of the proposal is to adapt the currently neglected area of ​​the housing estate to its original predestination, use as a recreational, cultural and sports space for residents and visitors to the city with regard to its microclimatic and ecostabilization function. It is necessary to properly design vegetation adjustments in terms of aesthetics, function, safety, improvement of hygiene conditions and increase the ecostabilizing value of the inhabited landscape. In this case, it is a space of public and urban greenery, the concept of which must respect the methodological principles of creation in the context of time.

The revitalization of the courtyard prioritizes the support of biodiversity, it creates a park area from the given locality, which will be used for recreation, sports and culture of the inhabitants of the settlement.
The proposal for greenery consists in cultivating the area of ​​the housing estate with trees, shrubs, perennials and bulbous beds. The chosen dominant color of vegetation elements is purple – white – yellow, brown and naturally complemented by shades of green. With their flowering effect, fruits or foliage, they complement the concept of purple-white-yellow color. The usefulness of small fruits is brought by fly agaric (Amelanchier), chokeberry (Aronia), sea buckthorn (Hippophae), or mullet (Chaenomeles). The colors are enriched in the design mainly by the color and smell of flowers. In early spring, the bright viburnum Dawn (Viburnum x bodnatense´Dawn´) blooms with bright, pink flowers.
In the most representative part of the boulevard, the ground cover types of roses (Rosa ´Innocencia´), St. John’s wort (Hypericum´Hidcode´) and the glossy earthworm ´Maigrun´ (Loniceranitida ´Maigrun´) are used. They were selected for beautiful, long-lasting flowering and evergreen.
The higher truss groups divide the space in the middle part, while in the lower part they close the views and raise their eyes to the more distant landscape.

The element of perennial flowerbeds is the shortest element, but its effect is the first of all the mentioned vegetation elements. This element is designed to bloom for a long time, without the need for regular watering of flower beds. Of course, in case of prolonged drought, it is advisable to irrigate the plants in the first years after planting.
The flowerbeds are composed of flowering herbs, ornamental grasses, medicinal herbs and spring ornamental bulbs, so that we achieve a year-round effect of aesthetics but also usefulness. The design took into account the long flowering period of perennials and their longer lifespan. Perennial beds bloom again in purple-white-yellow.

Note: Regular spring pruning is highly demanded! Regular skin care is especially necessary for the first three years after establishment. When mulching beds properly, the skin will be low-demanding, at the same time it should be emphasized that non-woven geotextiles must not be used under the mulch, which intensively degrades the soil and its contribution to weed prevention is minimal. Its other negative is preventing perennials from growing.
We give onions about 20 pcs / m2. According to the recommendation of the authors of the Methodological Manual from the Dendrological Garden of Pruhonice. “20-30 pcs / m2 is recommended. Bulbs are very important for the spring aspect of flowering. Smaller bulbs are planted in nests in several pieces (10-20 pcs.), Larger individually. Botanical or little-bred species are chosen, which they do not have to pick from the soil. “

Three-lobed peacock species (Parthenocissustricuspidata´Veitchii´) were selected in combination with climbing ivy (Hederahelix). Pavinič is a fast-growing liana, it sucks itself and is deciduous with a strong red coloring effect in autumn. Its optimal complement is ivy, an evergreen, slow-growing climbing liana. Both are low maintenance and do not require a supporting structure for their successful vertical growth.

Based on experience and also from the results of the survey, similar concrete elements of benches and tables, which have a long service life, were placed in the project. To improve comfort on cold days, they are complemented by wooden seats and armrests. The sports elements are located in the southern part of the complex, they consist of a series of outdoor fitness exercise machines for work with their own weight, a tartan running track for sprints with a peisop jump and a parkour half-timber set.

The lighting concept was compiled in collaboration with the Lightlab lighting studio, which processed and verified the placement of the luminaires in the space so that the lighting was even, intense in places where it is needed and dimmed where spaces are more intimate or less used. 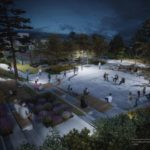 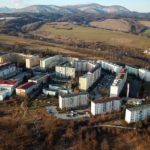 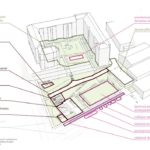 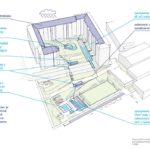 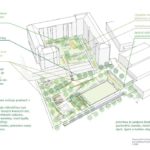 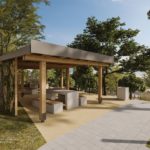 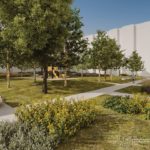 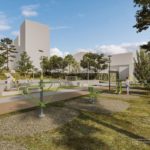 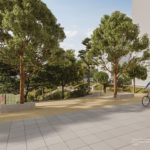 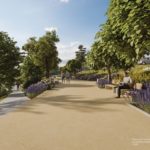 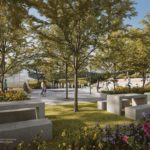 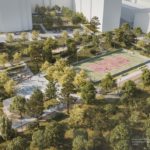 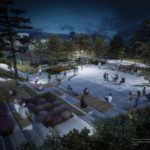